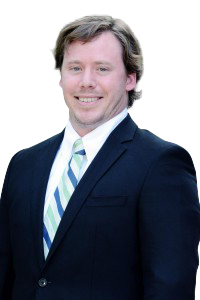 Dr. Justin Blessing grew up in Raleigh, where he attended Leesville elementary, middle, and high school and developed a strong appreciation for, and sense of, community. Upon graduation, he went on to earn degrees in business administration and chemistry while attending the University of North Carolina at Chapel Hill.

During his years at UNC he discovered his interest in dentistry. After obtaining his undergraduate degrees, he decided to attend NYU College of Dentistry, where he earned his DDS. After he completed his schooling he returned to Raleigh, where he has been serving his community as a member of the Riccobene team ever since. Dr. Justin Blessing is one of Riccobene Associate Family Dentistry’s highly trained Sedation Certified Doctors.

During his downtime, Dr. Blessing spends his time with his wife, Sarah, and their two golden retrievers, Miller and Stella.