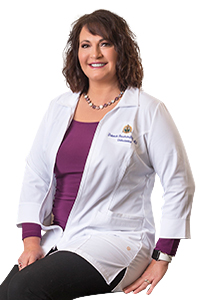 Dr. Deborah Bassham received her bachelor’s degree in education with a specialization in learning disabilities from Concord University in West Virginia in 1985. She then went on to attend West Virginia University, where she earned her Master’s of Science degree and Doctorate of Dental Surgery. During dental school, she was inducted into the honorary Epsilon Kappa Society and received the prestigious Pierre Fauchard Award. Upon graduating dental school at the top of her class in 1999, she began working at a private orthodontic practice in Abdingon, VA, where she focused on practicing orthodontics for 20 years.

Dr. Bassham insists that she has spent most of her life in a gym, a field, or on a golf course. She loves being outdoors, hiking, biking, running, and spending time at the beach. In addition to her other academic achievements, she also earned a degree in photography from the New York Institute of Photography, and she enjoys using her photography knowledge when traveling. She loves spending time with her family and her dogs, and she has three wonderful sons who are currently attending colleges in three different states. While she is very thankful for the families that she got to work with and the friends she made at her previous practice, Dr. Bassham is excited to have started a new chapter with Riccobene Associates.